Chairman of the Iranian Parliament’s National Security and Foreign Policy Commission Alaeddin Boroujerdi said the high voter turnout in Syria’s presidential election today meant the failure of the hostile policies pursued by the US and its allies against the country.
Boroujerdi, who is in Syria at the head of a parliamentary delegation to monitor the election, said on Tuesday that by its massive turnout in the vote, “the Syrian nation gave a strong response to the crimes committed by the US and its allies over the past three years”.
He underlined the importance of the presidential polls in Syria, saying it should be interpreted as an important political development in that country.
Seven delegations from participants in The Friends of Syria Conference, including Iran, the Philippines, Bolivia, Venezuela, Tajikistan, Zimbabwe and Uganda arrived in Damascus this morning to monitor the democratic trend of the presidential election in Syria.
The Iranian parliamentarians arrived in the Syrian capital on Tuesday morning to monitor the presidential poll in the country.
Heads of the foreign policy commissions of the parliaments of sum 30 countries which have friendly ties with Syria convened in a ‘Friends of Syria’ Conference in Tehran on Sunday to discuss the situation in the crisis-hit country.
Upon his arrival in Damascus, Boroujerdi said the Iranian lawmakers were divided into two groups to visit the polling stations in Damascus as well as the city of Aleppo in Northwestern Syria.
The senior Iranian legislator further said Syrians will decide the fate of their home country through this election. “The Islamic Republic of Iran respects whatever decision the Syrian people make.”
Boroujerdi and the other delegations visited several polling stations across Damascus.
Meantime, a group of Iranian parliamentarians arrived in the city of Aleppo this morning along with a number of their counterparts from six of the states which participated in the Friends of Syria Conference in Tehran.
The Iranian lawmakers and their accompanying delegations were welcomed by the residents of Aleppo.
Syrian citizens flocked to the polling stations on Tuesday to elect a president for the country for the next seven years.
Polling centers opened at 07:00 Tuesday morning for Syrian citizens across the country to cast their ballots in the presidential elections.
The presidential election in Syria is the first pluralistic election process based on the new Constitution of Syria which was endorsed in 2012.
A total number of 11,776 ballot boxes in 9601 polling stations have been arranged throughout the country.
Syrian expatriates cast their votes at the country’s embassies and missions abroad on Wednesday, showing a massive turnout that even shocked the western media.
Voting for the Syrian expatriates in neighboring Lebanon was extended for an additional day due to an unprecedented turnout.
Reports said on Sunday that large numbers of Syrians returned home from Lebanon as the presidential voting approached.
Thousands of Syrian civilians arrived in their hometowns on Sunday near the Lebanese border from the Beqa’a border crossing.
Also, a delegation representing the Syrian community in France and Belgium reached Jdaidet Yabous crossing in Damascus Countryside on Monday in a move to take part in the presidential election.
The French and Belgian governments prevented the Syrian communities from exercising their constitutional right to vote in the presidential elections on the French and Belgian territories.
Italy, the US, Canada, Germany, the UAE, Qatar and Saudi Arabia also followed suit and did not allow the Syrian expatriates to take part in the election.
There are three candidates in Syria’s presidential election, namely incumbent President Bashar al-Assad and Maher Abdel Hafiz Hajjar and Hassan Abdallah al-Nuri.
According to the Syria’s Interior Ministry officials, nearly 16 million Syrians are eligible to vote in the presidential poll.
Damascus has insisted that it would hold the presidential poll despite the foreign-backed militancy, which has, according to some sources, killed over 150,000 people and displaced millions of others since it started in March 2011. 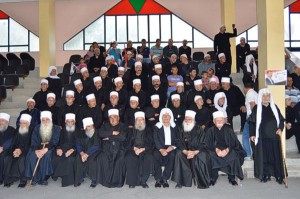 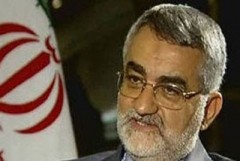 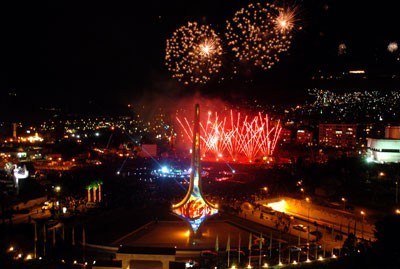 President al-Assad: Expression of joy won’t justify shooting fire in the air which poses a threat to the citizens’ lives